Stuff explains- Keep up the pressure friends, they’re feeling it!

Gratifying to see the Stuff Editor in Chief needing to write an editorial defending allegations of political bias. It means they’re getting the message, and can only keep their heads buried in the sand and keep publishing partisan fake news  at the risk of going broke.

The tragedy is Mr Crewdson really does believe the balderdash he has written. Stuff are a group of bubble living progressives who have no clue concerning ideas outside the narrow piece of the political spectrum that they and their progressive friends exist on. They think they’re being objective, because they just do not get anyone or any ideas that exist outside their bubble. Exchanging ideas with Mr Crewdson on Twitter (to his credit he did engage occasionally) was like talking to a brick wall.

His flag waving for Stuff begins with the claim that their story on deaths occurring at a firing range in Afghanistan is proof that they are not influenced by the millions of dollars they receive from the govt. This didn’t embarrass the govt, it embarrassed and weakened our Defence forces, an event the left love to precipitate all over the west. Jacinda Ardern like every other hard leftist hates our military. She would have enjoyed that story.

Especially galling are Mr Crewdson’s claims to hold the powerful to account, when his own leftist political perceptions, and the fact that almost every person employed at the newspaper share those perspectives makes his claim impossible. Today, the left are the powerful, and Mr Crewdson is one of them by many means, including for example his refusal to hold the UN Intergovernmental Panel on Climate Change to account, or to scrutinise NZ’s own science bodies for their similarly outrageous political bias. 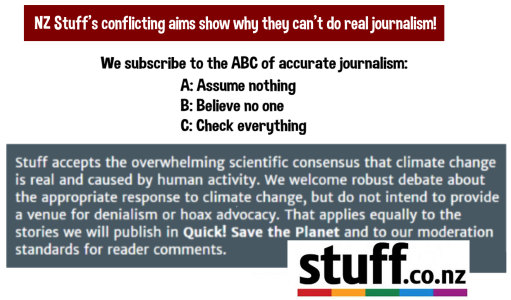 Mr Crewdson is one of them by means of his papers persistence in running stories sourced from such discredited far left outlets as CNN, the New York Times and the American Associated Press. Hence his paper’s crude and obvious distaste for Donald Trump and its craven servitude to the Biden govt.

The Stuff Editor hits the nail on the head though when he says he was not worried about the govt’s outrageous conditions to “support public interest journalism”. Mr Crewdson admits that they’re already giving special treatment to Maori issues under their own declared editorial policy. So he is unwittingly confirming the theory that the reason Stuff doesn’t recognise their own bias is that they are in political lockstep with the govt anyway.

Mr Crewdson also claims that funding by NZ on Air acts as some kind of protection against bias. He says lamely-

“…it’s not Broadcasting Minister Kris Faafoi doling out the cash. The fund is administered by NZ on Air, the state’s independent media-funding agency. NZ on Air acts at arm’s length from the government of the day, and doesn’t vet proposals based on whether they’re palatable to politicians.”

NZ On Air, in fact all of Creative NZ is a hot bed of progressive political activism, and that Patrick does not know this is just one more pointer to his blinkered viewpoint.

Perhaps his most ridiculous argument is the claim that the funding he receives from Ms Ardern is comparable to the pension received by superannuitants. The pension is their money. It was taken from their weekly wages, invested by the govt and is given back to them with interest upon their retirement. The money Stuff gets from Jacinda is forcibly taken from NZers to support a newspaper we would rather not support. That Mr Crewsdon can’t see why that might piss some people off is perhaps another example of how out of touch he is.

As for trust, that went out the window long ago. We see your journalists Patrick. We converse with them on Twitter. (One tried to get me banned) We see what they write. We’re not damn fools. Anyone can see their political leanings, and we see those leanings permeating everything they write.

Last week one of them wrote an ignorant, misinformed and arrogant article suggesting the residents of Tauranga should die because they oppose Maori wards and support the age old principle of one man one vote. Yes, it was an opinion piece, but it still says so much about who you are and why we can never expect any real objectivity.

The core of our objection to Stuff is its failure to maintain a pluralist democracy, which is your primary job and you have ignored that responsibility. Take on the real powerful, that is the left/ progressive and Maori separatist factions and monolithic left wing bureaucracy/ academia.

Start questioning the mammoth govt/ private sector environmental and global warming scam. The gross and evil indoctrination of our children in politically corrupted schools and universities. The mass trampling of rights in terms of ideas that impact severely upon our lives, but which we are never given any choice on. Like mass immigration.

Then we might just see some worth in your existence. Right now, with the damage we perceive you as doing to our democracy, in lockstep with every other media outlet in New Zealand, it would suit us if you were to go broke tomorrow.

Hire some conservatives you damn fraud. Jacinda only gives you our money because overall, she likes you. If you were doing your job, that wouldn’t be true.