The New Zealand media is a confederation of left wing liars. TV One’s failure to report on anti-mandate protests by Canadian truckers is the most stark example of this dishonesty. It illustrates media’s willingness to manipulate to the advantage of the Ardern govt those NZ citizens who still inexplicably trust them.

“The Minister of Health can only make orders under the legislation if satisfied that the order does not limit or is a justified limit on the rights and freedoms in the New Zealand Bill of Rights Act 1990​, which then states in S11 that ‘everyone has the right to refuse to undergo any medical treatment.”

He said this to discredit claims that Jacinda Ardern was about to make vaccination mandatory, and his statement was used by NZ media and Facebook to justify their partisan attacks on individuals, organisations and political parties making these claims. The truth is Jacinda Ardern has never given a damn for the Bill of Rights, and media, when they should have been confronting her on this, have been overwhelmingly on Ardern’s side.

It is just one example of the thousands of manipulative misrepresentations that characterise the NZ media’s rejection of truth in favour of propaganda. Something they do in their abject supplication to the principle of the “noble lie”. That’s where they justify their lying by claiming it it for “the public good”.

The problem is that what leftists gauge as being in “the public good” is frequently far from “good”, and this is the case with their constant lying on the issue of the Covid 19 virus.

Media does its best to avoid outright lies of course, and to be exactingly accurate, one has to argue over the meaning of words like “forced”. Is one forced to do something when there is always the option of quitting your job, losing your income, then failing to meet mortgage payments, and ending up with husband wife and kids all on the streets?

This is the option faced by many NZ citizens, and also by American and Canadian truckers who were delivered a similar ultimatum by Fidel Castro look alike Justin Trudeau, far left PM of Canada. The truckers were told by Trudeau that they could not cross the American/Canadian border unless they provided a vaccination “passport”.

This requirement effectively put many out of their job carting freight from Canada to the US and vice versa. So they decided to stage a protest by organising a convoy to the Canadian capital in Ottawa, and this protest turned into the mother of all protests.

Not only has the convoy grown to over 50 miles in length, it has encouraged Canadian citizens to turn out in droves in support as the convoy passes through their towns and cities. Thousands of citizens are lining roads and overpasses, waving Canadian flags and protest signs in the falling snow in an amazingly inspirational sight. 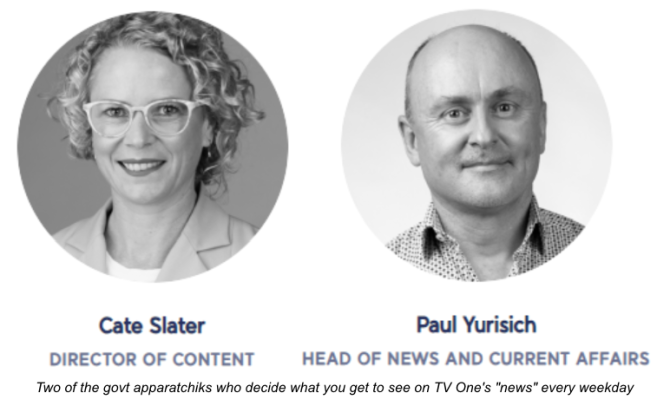 That heady and inspirational feeling the protests generate is exactly why Jacinda Ardern’s cowardly little apparatchiks at TV One have refused to report on the event. They’re desperately afraid that news of such a momentous protest will awaken more NZ citizens to the fraud of Ardern’s govt and generate more backing for local protest groups. So they resort to the “noble lie”, (in this case a lie by omission).

TV One may not be the worst of NZ’s corrupted media, but it is by far the most influential. Given its status as a “heritage broadcaster”, millions of people view it out of habit. Especially elderly NZers. Disconnected from the digitial media revolution, they have no idea they are being constantly lied to. They stoically watch and trust TV One “news” each night with no suspicion they are being manipulated and led astray by a group of skulking master govt propagandists.

This is not the only anti-mandate protest TV One has failed to report on, but it is the most stark example of their mission to deceive. The Canadian trucker’s protest is one of the biggest in human history, not only in size but in meaning and in influence. There is every chance it could lead to the resignation of Trudeau or the fall of his govt.

That such an event cannot make it onto the TV One news proves once and for all what pro-government imposters are running the station and how journalism in this country has been utterly corrupted by the left.

There will be no real democracy while such charlatans control NZ’s paramount news service in this manner, and it suggests that rather than holding protests in streets and parks, people should take their concerns right to the core of the problem, and that is the TV One offices and studios. Their regional addresses and contacts are at this link.

Note: At the time of writing Newshub had run a report from the discredited left wing Reuter’s agency highly critical of the protest and with the lie that the trucks numbered in their “hundreds”. A feeble and transparent attempt to diminish the inspirational nature of the event and the massive support it has received from everyday Canadians.