A small political group holds a regular weekly meeting in Herne Bay, and did so last Wednesday night. Little did the group know they were under surveillance by intrepid reporters of Stuff News, who intercepted their emails, took clandestine video, and reported them to the police for breaching Covid-19 rules.

Stuff does not identify the group but describes it as having a name that alludes to “an alt-right internet subculture.” They report upon their surveillance of the group as follows-

“When Stuff arrived about 7pm, the meeting was already under way. The group could be heard speaking, laughing and clinking bottles. Eventually they turned on a film. Proceedings began to wind up about 9pm. A man opened the club’s door and checked the coast was clear before the first attendee left for his car and drove off.”

Not only does Stuff read the groups private emails, it has covertly filmed them walking in the street. It also reported the meeting to the owners of the property, no doubt hoping to get the group’s use of the venue cancelled. Stuff called the police on the group at the time, but they were too busy too come.

Of course the real issue is that Stuff perceives the group as “right wing” and therefore subversive to the govt who pays their wages. If it had been a Labour group or anyone on the left, you can bet your house this would never have made it into Stuff’s news coverage.

The irony here is that Stuff claims in its begging ads that it “sticks up for the little guy”. A lie. Stuff is a stinking organ of the far left big state that today holds New Zealand in a death grip conveniently justified by the Covid-19 crisis many see as over-hyped and unnecessary.

Germany was divided at the end of WWII. The free West took one half, and the Communists took the other half, wherein they set up a massive surveillance state aimed at combatting wrong think and unapproved speech. The govt dept that carried out this surveillance was called the Ministerium für Staatssicherheit, commonly known as the Stasi. 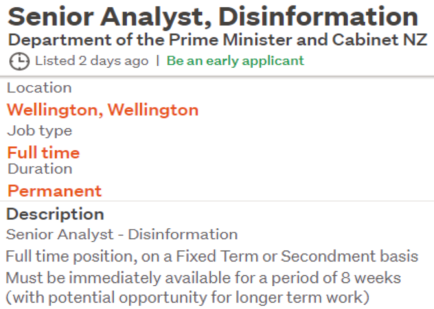 Prime Minister Ardern looking for snitches to work in her dept

The Stasi was staffed by 120,000 agents who snooped on citizens, arrested them and even tortured them if they were suspected of thinking wrongly or acting in any way sympathetic to the Free West. They were supported by a huge network of (est) 200,000 informants.

When Germany unified in 1990, the Stasi heiraarchy and its informants were prosecuted for their abuses of human rights. Germany still holds all names of Stasi employees and their snitches for the public to view at the  special agency set up to investigate their crimes against humanity.

Snitching on your neighbors has always been a part of communist totalitarian dictatorships, and its how the practice came to be reviled in the free west. Sad to see it happening in New Zealand today, but not unexpected knowing the history of the Prime Minister Jacinda Ardern and her govt’s shady taxpayer funded relationship with the media.

Further to this issue, the Department of the Prime Minister is advertising for snitches now, and offering a salary of $95000 to $110,000 for “Analysts- Disinformation” who are

“familiar with proactively searching across public facing social platforms. They will actively monitor open source social media channels, to triage across these channels and to case-manage issues. You will work as part of a small team in DPMC and connect in with a larger cross-government networks, working to respond to, and build resilience to, disinformation in New Zealand”

So you can earn reasonably good money in NZ today as a govt snitch, either working for the Prime Minister’s Dept or even Stuff News. As under the Ardern govt we slip slowly towards a totalitarian socialist state where fear of snitches keeps the population controlled just as it has done in all such states throughout history.