Ardern plans even more attacks on freedom of expression

The govt plans to have a much bigger say in what you can read listen to and watch, with moves to give the Censor a massive increase in powers. The Classification Office will decide what is misinformation and what is truth, and shut off anything it categorizes as the former.

A recent report prepared for the Office recommends a series of legislative changes to address the perceived problem of “misinformation” in our society. Apparently this has become a major issue with the rise of the internet and social media. The report is called “Edge of the Infodemic” and you can download a copy below. 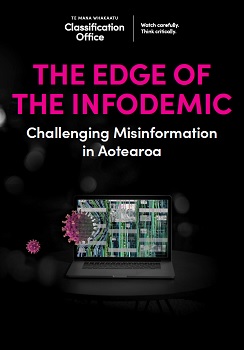 Cover of the report

We’re adjudged by the report’s authors to be too stupid to work out for ourselves what is true and what isn’t, so the proposal is to give the Classification Office, otherwise known as the Censor, expanded powers to make these decisions for us. Here is an example of the prejudicial garbage the report contains-

“Despite the overwhelming scientific consensus about the influence of human activities on global rises in temperature, climate change remains a topic of heated debate for many. This is, at least in part, a result of sophisticated disinformation campaigns –continuing over decades – that were often funded by the fossil fuel industry.”

You will of course remember when the Covid19 crisis began, and many people thought the virus had come from China. The Censor, if he had had the power then, would have stifled that information as untrue. However the allegations turned out to be right. So would we ever have learnt that truth if the Censor had stepped in as planned? Probably not. Likewise Climate Change.

The Censor’s original brief was to ensure society and children in the main were protected from obscene material in films. Classify movies as suitable for different age groups. Deciding what is truth and what is not for adults is a major step up in responsibility.

Of course this original mission has already been perverted by the state. For example a recent Youtube video was taken down and the publisher arrested in a complex set of circumstances where the Censor played a key role. Few people know what the video was about, but far left so called Maori radicals complained that it was threatening and advocating violence.

One would think that if this was so the video would have breached at least some of our existing laws, but apparently the Police didn’t think they could prove this. They did not respond to the complaints. So what happened?

In what was really an abuse of the Censor’s office, the video, which was not obscene, was hastily declared an offensive publication, and the publisher was charged with breaching censorship laws. The courts will decide if this was a legitimate legal procedure, but they’re as corrupt as the govt anyway, so it’s likely this abuse of process will stand.

So you can imagine what might happen if the recommendations in the report were implemented. It’s built around a dodgy poll based on leading questions and written in painfully sophomoric and subjective language.

Undoubtedly the product of some humanities course graduate who has never been taught real words or probably even read anything outside that psychologically torturous material recommended by screeching left wing lecturers whose own experience of life is restricted to the cloistered staffrooms of NZ’s politically corrupted universities.

There needs to be a concerted effort to halt this Stasi style nonsense. Free speech is under enough threat already. We can count on the Nats to say something like, “We agree with the concept but the implementation is flawed”. ACT might take a stand. Let’s hope they do. The report needs to be binned immediately and the Censor told to pull his commie head in and stick to his original brief.

Edge of the Infodemic Report (PDF)