Most western defence forces have been infiltrated by the rot of wokeism. New Zealand is no exception, and its a serious security issue.

A soldier entered an Army essay competition and won it. However when Defence Chiefs were appraised of the essay’s content, a critique of wokeism and the damage it was doing to the Army’s ability to defend the country, they hid it from sight and said they had made a major mistake. 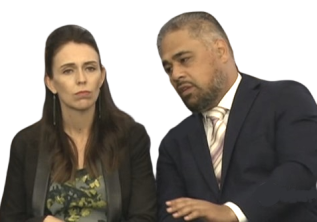 The essay, (download link below) titled Can the Army Afford to go Woke, Benign Social Progress or National Security Threat, won in the “private writing category”. However wokists in the Army complained so shrilly about the essay’s contents they were heard by Defence Minister Peeni Henare.

Henare, who is basically just Jacinda Ardern’s puppet, said he told Defence Force chief Air Marshal Kevin Short yesterday that “we’re better than that, and have values that don’t align with the essay.”

In a statement, Army Chief Major General John Boswell accepted the decision to award the piece first place was an error. He says the essay won because it was well-written, but the views are not compatible with the army’s values. He said

“it has been made clear to me that publishing this essay was viewed as undermining both the inclusive culture we are seeking and the work that is being done across all ranks to effect this change – work that is incredibly important, not just to me but to our organisation.”

NZ Defence force senior staff need to watch Tucker Carlson and his guest, decorated military veteran Sean Parnell and listen to Sean’s comments on similar events in the US armed forces. Its time to get wokeness out of our Defence forces and return them to their primary role of defending us against international threats. There is no wokeness in the Communist Chinese Armed Forces.

The essay has been taken down and an apology rests in its place. You can download the essay here. Read it and come to your own conclusion. Here’s the writer’s final paragraph.

I appreciate that if this piece were to win the writing competition, the optics may not be as desirable as one expressing the opposing viewpoint. I also understand that attracting recruits, public opinion and therefore, potentially, funding may depend on those optics. These considerations may in themselves necessitate the adoption of Diversity and Inclusion policies. However, I challenge the NZ Army to draw on its ‘3CI’ values and to continue to have the courage to do the thankless work of defending a nation that often may not appreciate the security it provides. To allow itself to become embroiled in these ‘culture wars’ would be an embarrassment, especially to the older generation of veterans and to the memory of those who paid the ultimate price. The Army should stick to fighting real wars.

Well said Mr N. Dell, whoever and wherever you are.