New Zealand today is a Stasi like police state where citizens who oppose the views of the liberal progressive govt of Jacinda Ardern are intimidated, marginalised and silenced by the combined forces of the Police, the Media and Academia. 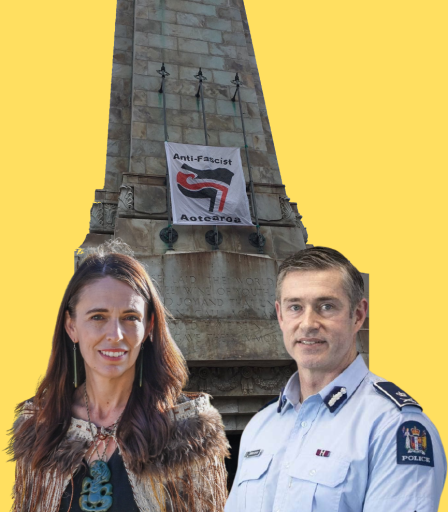 Ardern’s hand picked Police Commissioner Andrew Coster allowed communist group ANTIFA to hang their flag on the Wellington Cenotaph, a memorial to the NZ soldiers who died in World Wars One and Two

NZ Police, the NZ Herald and academics all collaborated to ban Mr Yemini. They collectively alleged Mr Yemini had been convicted of “assault” of his wife. Ardern’s cheerleaders on Twitter called him a “wife beater”. Newshub lined up an academic to support these allegations, and her statement, made on their nightly news program, is in the video below. The allegations are in fact untrue.

Mr Yemini was not convicted of “assault”, but of the much lesser charge of “unlawful assault”. This is in fact the lowest rating of all assault charges and is usually applied when the assault is unintentional. Avi threw a chopping block at a wall in anger. It bounced off the wall and struck his wife a glancing blow to the head. Causing a bruise that did not require medical attention. In fact his wife did not file charges relating to the incident until three years later.

They also claimed Mr Yemini had described himself as a “Jewish Nazi”. This too is false. Mr Yemini once remarked sarcastically on the irony of Antifa protesters calling him a Nazi when he was Jewish. (he’s actually served in the Israeli army) This off the cuff remark was converted into an out of context confession of Nazism by the govt’s lying media/ academic shills.

The persecution and barring of Avi Yemini was a deliberate and blatant deception. A web of lies woven by Police, media and academia all working in unison to satisfy the political objectives of the Ardern govt.

Even worse “unlawful assault” and the penalty (a $3000 fine) does not meet the legal threshold for barring entry. The offense needs to be serious enough to cause a one year jail sentence.

The Police had arbitrarily decided they did not want Mr Yemini in the country long before, and (as revealed by the BFD) had written to Interpol asking if they had anything on him. They did not. Immigration was persuaded to ban him anyway, and on a false pretext.

A similar example to the Avi Yemini injustice is the taking down of citizen journalist Chantelle Baker’s Facebook page. The legacy media produced a govt funded pseudo-documentary aimed at discrediting Chantelle, and soon after, her page, where she had close to 100,000 followers, disappeared from view.

Facebook was probably prompted to take this action by one of the govt’s many police state entities monitoring our social media use. Most likely the communist Kate Hannah’s odious “Disinformation Project”. Stuff’s collaborative pseudo documentary was produced to ease the way for this event.

Then we have the arrest of the couple who run the Counterspin News service. Another independently (non govt) funded internet based news service. Their broadcasting equipment was confiscated. Laws adapted from the censor’s office were used as a reason for the arrest.

A few decades ago, the left told religious groups who protested at what they saw as blasphemy on TV to change the channel. Apparently this change the channel rule no longer applies. No one is forced to watch Counterspin Media, and there has not been one person named by the authorities as a victim of their surmised “crimes”.

So what is all that if its not an out of control Police State?

Dr Mona Crewell of Victoria University appeared on Newshub and attacked both Chantelle Baker and Avi Yemini. Apparently the irony of a German national attacking an Israeli escaped Newshub.

The incredible circumstance that enables all of this to happen (with only limited public outrage) is the sheep like belief that govt should be the arbiter of what is dis/misinformation. That such a ridiculous proposition is wholeheartedly endorsed by the country’s legacy media, of all people, shows how far down the police state river we have drifted. Especially over the last five years.

There is another important factor at play, and that is the connivance of the so called opposition parties, most notably the National Party. Their silence on the govt’s authoritarian campaign against “mis/disinformation” disqualifies them from ever being considered a serious alternative to the present Ardern regime.

They’re so useless they may as well all fold their tents and go back to what they were doing before they entered politics. To do and say nothing while NZ as a democracy collapses into a junior version of East Germany makes them all cowards, and their leader Christopher Luxon, well he looks the most cowardly of them all.