When Auckland’s inner city liberals wanted a cycle lane across the Harbour they smashed through a police barricade and rode across the bridge, impeding traffic and in utter defiance of the law. With obscene haste, Jacinda Ardern’s govt rushed to announce they would build a billion dollar lane. The cyclists got just what they wanted.

Not many farmers ride bicycles. It’s not easy to distribute hay to your stock from a Merida Big Seven Hardtail Mountain Bike even if it is in Race Red. Farmers drive tractors and utes, and this apparently puts them offside with Jacinda. Minister for the Environment David Parker stated on TV this morning the protests will not make one iota of difference to the government’s plans.

Many of the media have interviews with Federated Farmers president Andrew Hoggard, and on NewstalkZB this morning he said “at first people thought it was just a bunch of fringe people going along, but now it seems pretty mainstream”.

The truth is this protest is happening because many farmers are unhappy with Federated Farmers as their representative group, and see them as too far into bed with the environmental movement. Which they are. Mr Hoggard might be supporting the protest today, but he does so reluctantly and had to be dragged to the party by the people he describes as “fringe”.

Others more directly connected to the protests have also been very mild, hesitant and uncertain what to say when media asks them what their beef is. Because they’re afraid to be seen as radicals. Harden up boys and girls!

NZ Farmers don’t need to riot like the French Farmers, but they need to show some spark

As Mr Parker has already said, this govt doesn’t respond to nice. The inner city liberals who broke through police barricades to ride across the harbour bridge were not nice. They got what they wanted.

When this protest was first promoted there was talk of it being like the Yellow Vest protests of the French Farmers. They didn’t give a damn for being nice, and they were not intimidated by the govt/ media counter offensive.

New Zealand farmers need to be more like the Yellow Vests. This isn’t a picnic in the park boys, this is about your livelihood and the future of NZ. We don’t want riots, but lame subjugation to Jacinda’s bought media won’t do you a scrap of good. Show some damn spark. If you can’t learn something from Auckland’s inner city bike riding liberals, then learn it from the farmers of France! 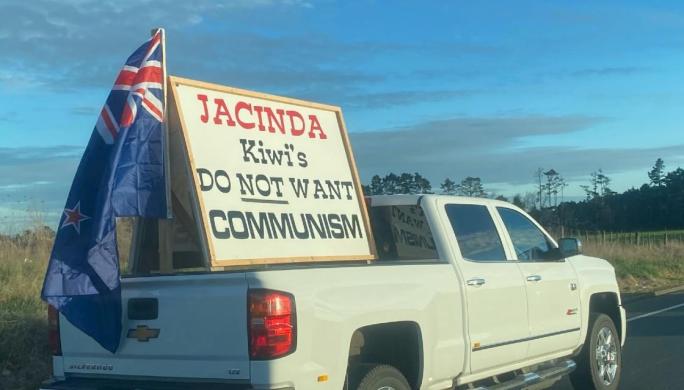