Antifa and Hamas may as well have written the script it was so bad. The conference is called “He Whenua Taurikura” and who knows what the hell that means, except for posturing academics and sold out political activists pretending to be journalists? 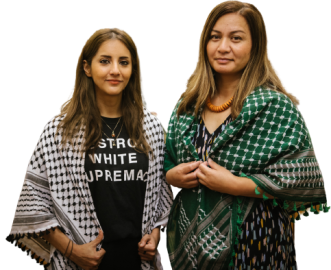 Green Party MPs actively advocate for Palestinian terror groups. Are they under surveillance?

Rebecca Kitteridge, director general the Security Intelligence Service said the idea was to publicly examine the “dynamic nature of the terrorism and violent extremism risk”. Why the hell do we need to have a public conference involving the SIS? On a task that to be successful needs to stay low profile. The whole concept of a public discussion on security and terrorism is lunacy from the get go.

The reason we’re having it is because Jacinda Ardern wants the Islamic vote. So she’s pandering to Islamic radicals who are milking the Christchurch mosque attack for every political and social advantage they can. “We care”, she’s saying, “so make sure you vote Labour”.

The conference has a bevy of speakers, academics and “specialists” who have all apparently read Saul Alinsky, and understand perfectly the strategies he advocated for a total left wing takeover of society. (Maybe they haven’t read Saul, but they should, then they might wake up to what fools they are)

In Rules for Radicals, basically the Antifa strategy manual, Alinsky advocates for the use of a common enemy against a community as a uniting element. He would find an external antagonist to turn into this “common enemy”. Once the “enemy” was established, the community would come together in opposition.

That antagonist in NZ today is the “white supremacist”. The remarkable thing about this is there are apparently no supremacists of any other colour. No black or brown or whatever. Just white.

This is all based on the theme that Tarrant was a white supremacist, that white supremacy motivated his actions and that NZ is teeming with nutters who want to emulate him. Every one of those suppositions is a factless lie that does not stand logical scrutiny for one minute. Tarrant is a madman, and his incoherent disjointed ramblings have no identifiable connection to any established political ideology. (He described himself as an eco-terrorist).

Its incredible, but the whole “security” sector in NZ has been hi-jacked by Islamist activists and the far left. That’s why there was a walkout by the Christchurch Mosque representatives yesterday when Juliet Moses of the NZ Jewish Council spoke the truth. Moses told the crowd that leaders should be consistent in condemning terrorism.

“Hezbollah and Hamas, their military wings are proscribed terror organisations in New Zealand but we saw a rally in support of Hezbollah on Queen St in 2018.”

Juliet is right, and members of the Christchurch mosque and other Islamic community groups took a big part in that demonstration. As did MPS from the Green Communist Party.

Terrorism specialists are a growing commodity. A lot like climate change scientists. Without the subject threat, there’s no need for them, so their very existence depends on convincing us of some near and present danger. To their shame, they’ve joined up with the Alinsky far left and radical Islamists in identifying white supremacy as that threat.

They have mislead the public by saying they have stopped two potential Tarrant copycats, but its doubtful there was any real danger, and in fact one of two potential terrorists had Islamic motivations.

A few years ago, two ISIS sympathisers killed by USA drones were suspected to have been radicalised at the Christchurch Mosque. Anachronistically, another local 18 year old suspect terrorist, rather than be sent to jail, was given home detention at the mosque.

Newshub ran footage of the conference that included Valerie Morse, a well known communist subversive with connections to the Urewera Terrorist group from 2007. In 2018 along with other pro-Hamas supporters she claimed to have planted a bomb in a Wellington cinema showing a Jewish movie. What the hell is Morse doing directing policy for the SIS? (Newshub said nothing to identify Morse or her history.)

Christchurch Mosque representatives who walked out of the conference accentuated their victim status and called Juliet Moses a racist. This is against all logic and reason, for Islam is not a race. Never was and never will be. Yet our SIS, an organisation that should epitomize objectivity and rationality, buys into this opportunistic politically driven lie.

Valerie Morse is a life time Marxist subversive and a frequent go-to person for the NZ media, who never identify her as the communist revolutionary she is.

New Zealanders who oppose Islamic ideology do so because they value our western traditions of freedom, and they ask why did these people come to NZ in the first place if they didn’t want these freedoms? Why is the SIS so fulsomely supportive of an ideology that attacks the freedoms they are paid to protect?

The two day conference in Wellington is a shambolic politicised event that should never have happened. Then again, maybe it should have for it has shown the desperately incompetent state of security organisations in this country and how they have been infiltrated by subversives and carpetbaggers and Islamic sympathisers who are likely leading it to fail completely in its main objectives.

Like everything Labour and Jacinda Ardern own, security in NZ is all show and no go. In this case, a matter far more important than it usually is. Keeping New Zealanders safe from terrorism is no job for incompetent misinformed amateurs who so enthusiastically buy into left wing and Islamic political ideology.