Ardern’s radical past is more worrying given China situation

The exact number of years Jacinda Ardern was a member of the radical hard left group the International Union of Socialist Youth is unknown, but given she turned 20 in 2001, its likely to be around 10 years. Its not known if she has ever resigned, so if she is still a member today, that would bring it close to 15 or even as much as 20 years.

Even 10 years is a long time to spend with such a radical organisation. However Ardern was more than just a member. She was elected leader of the organisation in January 2008. The usual term is two years so she was therefore leader until January 2010.

Ardern was born in on the 26th July 1980. This means she was almost 30 years old when she relinquished the leadership of IUSY. As mentioned above, its not known if her membership is still current, however its plain she was a member of the group far beyond what most would see as her youth. 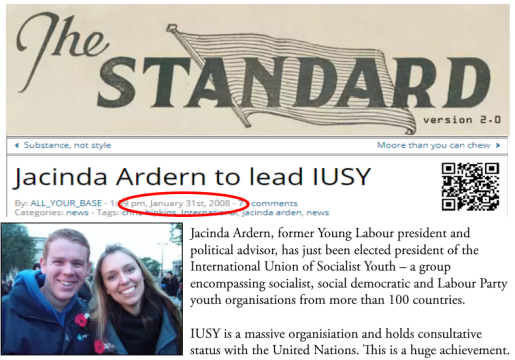 Why does this matter? Because in the video below, Ardern tries to make light of her time in IUSY and says she was only 25 at the time of her infamous “comrade” video. This may not be a direct lie, but its an attempt to mislead, as the facts above demonstrate. Why would Ardern attempt to deceive on this issue?

Whatever she learnt at IUSY, its probably still deeply ingrained in her psyche. She is politically hard left (or as Trevor Loudon says) a “small c communist”, and given the Maoist origins of many of her fellow Labour party members it is something that should be seen as vitally important.

This sinister circumstances is made all the more worrying by means of Ardern’s embrace of radical Maori separatist groups, who also have historical Maoist influences. Especially given the western world’s current fragile relationship with Communist China, and the predatory nature of China’s belligerent territorial expansions into the South Pacific.

Ardern’s communist proclivities are not just a “thing” from her misguided youth, as she tries to make out, and they add to the suspicions of our traditional allies who wonder just how big a threat she really is to Western security. That’s why they are concerned about her as PM of NZ, and why New Zealand’s membership of the Five Eyes intelligence alliance is also in jeopardy.

The video below, where Ardern downplays her long involvement with IUSY is a 30 second clip from 16 minute video by US based political analyst Trevor Louden where he comprehensively outlines the historical connections between Maoist communists and the Labour Party of today. Its shows Ardern should never be trusted.