On Friday almost 30 Wellington so called ‘leaders” issued an open letter to the Freedom Protesters at parliament house asking them to end their “illegal” protest. The opening sentence of the letter reads

We the undersigned ask that the current illegal protest activities in and around the Parliament precinct end immediately.

and it ends with this statement-

The people of Wellington have had enough of this illegal activity, harassment and disruption, we ask that it end immediately.

So it would appear that the alleged harassment and disruption aside, the so called ‘illegality’ of the protest is a big deal to the letter writers.

Not long ago, these same three politicians were seen conniving at schoolkids bunking school to attend climate change protests. Considering what a chronic problem absenteeism is one would think politicians in particular would be far more circumspect about encouraging it.

Nicola Willis, Grant Robertson and James Shaw on parliaments steps, where they all addressed “Climate Strike” kids who should by law have been at school

Given the kids broke the law to attend, the school climate strikes could easily qualify as illegal. Yet not only were they endorsed by politicians but also by teachers and activists and media across the country.

What’s more there were signs at these protests that would be at least as offensive as any seen at the Freedom protests. Not only was there plenty of profane language, signs also advocated for the culling of boomers from society and taking pensions off elderly people. How cruel is that? 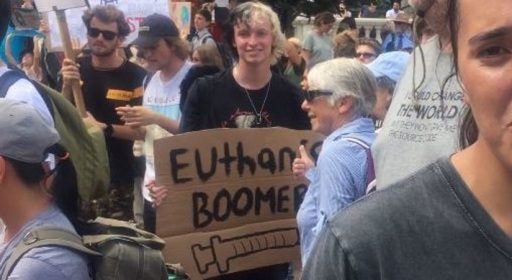 The people who signed the letter are at the least guilty of extremely selective morality, and maybe even rank hypocrisy, especially in the instance of Jimmy Shaw, who was reported in Stuff News in March 2019 as saying-

“When you are trying to get the attention of those whom you feel have let you down, following the rules and marching on the weekend isn’t going to cut it. A protest isn’t a protest if it’s on the terms of the very people you’re raising your protest with.”

So here is Shaw saying not only that protests don’t need to follow the rules, but its best they occur on weekdays so as to cause maximum disruption to businesses and workers and commuters. Hypocrisy of an astonishingly high degree when its exactly those issues that were the core of his complaint yesterday.

Its not really about the illegality or the alleged harassment and disruption. The main reason the letter writing nomenklatura don’t approve of the protest is because they know that they are the targets of what is essentially a long building popular uprising. A fight back against oppressive and dictatorial govt that has been guilty of massive over-reach not only in matters of Covid19 control but in many other matters of govt as well.

Like the fear mongering media, they want to distract from the main issue and the plain and simple fact that the solution to the protests is to drop the vaccination and mask mandates.

The way many overseas countries have already done as they acknowledge that Omicron is not much more than a cold or flu. Yesterday one of the country’s senior medical experts appeared on Radio NZ and confirmed this fact. Dr Bryan Betty made the following statement-

People with more than one brain cell know Ardern cannot rationally make the argument for continued mandates and shut downs. The protesters are right in their demands, and the buck stops with the PM. If she is sincere about ending the protests, she must stop her fear mongering, stop trying to distract from the real issue and agree to end the mandates. Now.

Listen to Checkpoint interview with Dr Bryan Betty yesterday wherein he is critical of media for creating unnecessary fear and anxiety over the Covid Omicron strain.