New Zealand media- completely untrustworthy and more so every day

One of the good things about social media is that mainstream media so called journalists are using it, and by their personal tweets and Facebook and Instagram posts they show us they’re just the kind of shallow groupthink left wing dropkicks we always knew they were anyway. Its good to see your long held opinions proved accurate.

A sign from the anti-vax mandate protests today, showing how the public are increasingly disenchanted with a media that doesn’t do its job

Their reporting on New Zealand’s freedom marches today has been disgustingly biased, and its in stark contrast to (for example) what we see when its a climate change protest.

Media have swooned like schoolgirls over every green left event. The first thing they do is exaggerate the numbers attending. Or take close in shots to make the crowd look bigger. Then, if there are any signs or flags there that show the events are in the main driven by communist revolutionaries, which they almost always are, they make sure these emblems are out of shot. 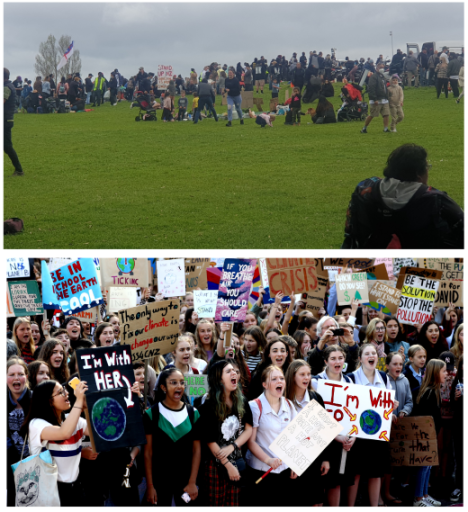 Two different styles of photos. The large empty foreground in the above pic makes the crowd look smaller and the protest limp, while the close in climate change protest pic makes it look dynamic and well attended.

If the protests have been organised by far left extremists, which they mostly are, this influence is played down if it is mentioned at all. When its a bunch of brainwashed hysterical school kids who really just need to shut up, show some humility, and go learn something about the world, the media treat them with fawning reverence and seriousness. Greta Thunberg’s completely undue fame is proof of this.

However when it is farmers protesting, or people unhappy about the Stasi-style overtones of the govt’s deeply flawed strategies to deal with the exaggerated emergency of Covid19, we see a complete turnaround from these deceitful partisan fake news charlatans.

Lana Andelane has been busy today reporting on the anti-vax mandate lockdown protests. She also has an Instagram account.

Firstly, the numbers at the protests are played down, and we see wide panoramic shots to make the crowd seem smaller (see example above). If the crowd is huge, we have to go to social/alternative media and see the reports of citizen journalists to find the truth. Large anti-Abortion protests are lucky to receive mainstream media coverage at all.

If there is any fringe group there, or anyone for that matter that the media thinks can discredit the true purpose of the protest, they’re given maximum coverage. This bias was blatantly on display during the Groundswell protests.

The NZ media have done a number on Donald Trump, and anyone in the country who uses these lying reprobates as their sole source of news therefore thinks Trump is Hitler incarnate. So naturally, if there are any Trump flags or signs at the protests, the media makes sure the public sees these images front and center. Anything bizarre or off target, if it can be used to discredit and muddy the message of the protests, the media go for it.

Today there was a section of protesters who appeared to be a “Maori” motorcycle gang. The media made it look as if they were leading the protests, and gave them maximum exposure and amplified the noise of their motorcycles. Media know such gangs are on the public nose right now, so they fell over themselves to make the gang the focal point of their reporting.

Good reporters are more scarce than rocking horse excrement in New Zealand today. Maybe some of the few real ones remaining could look into just why these motorcycles groups were in attendance.

Sure, they may have been there legitimately, but the political scene in NZ today is so fraught with deceit, it wouldn’t surprise anyone if it transpired they were actually there because Jacinda Ardern, who has gang connections and has given them millions of dollars of taxpayer money, had asked them to attend. To discredit the protests.

Same goes for those who were carrying the Trump flags, or other signs the media deemed offensive. How do we know they were not carried by false flagged Ardern sympathisers?

Its shocking how the media have completely failed in their central mission to hold the powerful to account. What we see today is that most journalists (so called) are cheering for the massively powerful alliance of big government and big cronyist global businesses.

Azaria Howell is a trainee “journalist”. Her tweets show she will have little trouble finding a job with NZ’s established media

We so badly need real media right now, and thankfully, its slowly arriving. Most of us with a brain use alternative media sites that have earned our trust, and that number is growing every day.

We need the established media like a hole in our heads. The stupid stuff we see them posting on their personal social media accounts not only proves they’re beyond redemption, it also proves they’re completely incapable of perceiving and reporting on events from a mature and balanced perspective.

Its why we have Jacinda Ardern in NZ, and Joe Biden in the US. Stupid, corrupt and partisan media elected them both, and now in each case, the people are slowly becoming aware they were sold a pup, and that same public is also realising the truth that the media today are not really the media. They’re a group of leftists trained not in journalism but in political activism for the “progressive” cause. 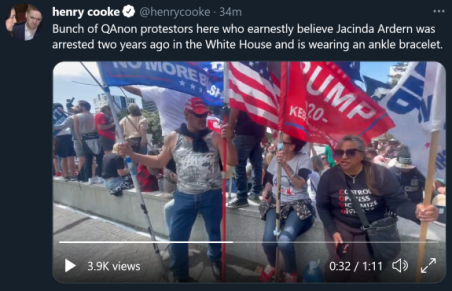 Henry Cooke, Stuff reporter and member of the parliamentary press gallery, does his bit to discredit the protest

Worst of all though, is that media know this to be true, and they know its why they’re becoming more despised every day. However their biases are so deeply embedded they will not admit it to themselves, and therefore they cannot help themselves. Even if they wanted to. The only possible outcome therefore is eventual insolvency. Hopefully soon after this despicable govt has been replaced and its craven media buddies are no longer propped up by a captive fear ridden audience and by money taken from you and I.